It has been time to once more travel back from the past and return to the present! I just couldn't wait writing about this watch.

It was in the middle of May when CWC announced that they were making a reissue of their first automatic dive watch. I contacted them directly with a “sign me up!” and then the wait began. The first estimated delivery was July and I immediately put the watch as number one on my list of watches to buy. Then in the beginning of June, Jason Heaton wrote this great article for Hodinkee and nothing else except for this watch was interesting anymore. This was going to be my Exit watch.

But July was postponed to August and August became "sometime later this year". So I started to purchase other watches and fell back into my regular flipping pace, and then I started the Tactical Diver project and forgot about the reissue completely. Then last week I suddenly received an e-mail from CWC saying that the watch was arriving any day now and asking me if there was a certain serial number I would be interested in. Hell. Yeah.

My watch was sent on October the 17th and showed up yesterday on the 18th. Instead of heading home to my family directly after work I took a small detour and went down by the water, to sit down on a park bench, where I could open up the package in peace and quiet, while the sun was setting down in the sea. I was going to savor this moment.

The watch was delivered in its regular tin can with the white paper cover (I wouldn’t want it any other way). The only new feature was a black leather watch roll inside the case that held the watch which was a nice touch.

Jeez Louise! What a beauty! I sat starring at it for a while, feeling the clicks of the bezel, listening carefully to the sound of the movement being wound manually, and just forgot about time even though a was holding it my hands. Suddenly I noticed the daylight fading rapidly. "Oh no, Instagram!" I quickly put the watch on my wrist, snapped a few photos of it in the little light that was left before the sun had completely set, and then I hurried home.

I will continue to update this post with new pictures and thoughts as this watch will accompany me through my everyday life. I just felt I had to share this with you while it was fresh instead of trying to look back on this moment in two years.

I’m so excited and honored to announce that the Cabot Watch Company have offered me to do a limited run of dive watches. There is no secret that I truly love CWC so the fact that this project is happening is really a big deal for me. I will give you a more thorough review regarding the design and the all the details  when the watch later will be presented here on the blog but basically what I have done is to compile all my favorite attributes and put them into the one watch I love the most; the CWC RN Quartz Diver. Only 20 watches will be manufactured so this limited edition will be quite unusual.

Since I announced this project on Instagram just a few days ago, more than half of the watches have already been booked by CWC fans who were so eager to show their interest even though I officially hadn’t gone out and communicated that I was accepting pre-orders. So if you want one just send me an e-mail or drop me a DM on Instagram. The watches are expected to arrive in January 2018. 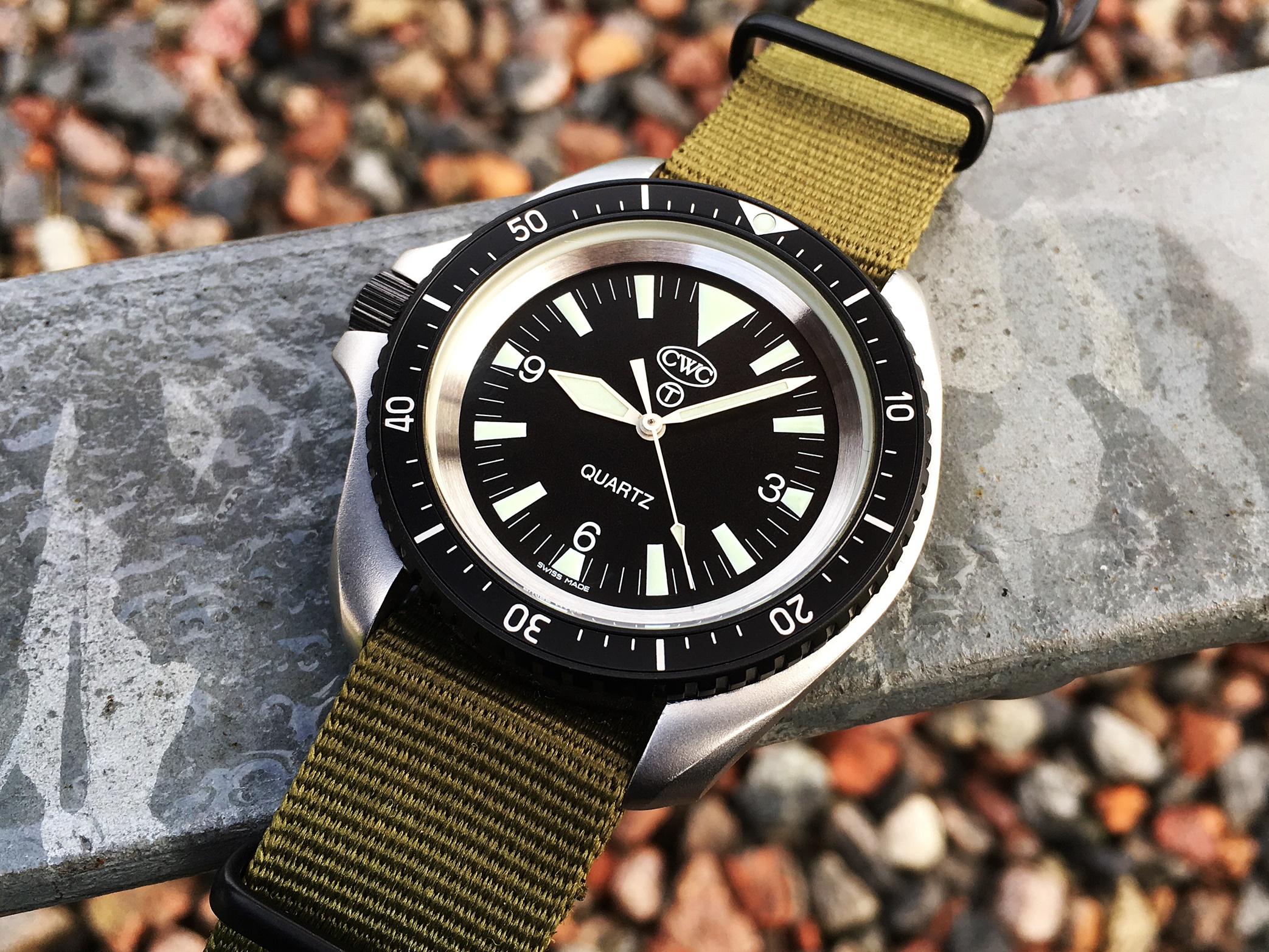 This project have almost made me lose interest in other watches. This watch will really have all the features that I desire the most. Wearing the prototype just confirms that to me every day. It is just awesome! The specs are pretty much finalized but there might be room for some minor changes. I will be updating this post with any confirmed changes and keep checking back and keep an eye out on Instagram for more pictures and any new announcements. 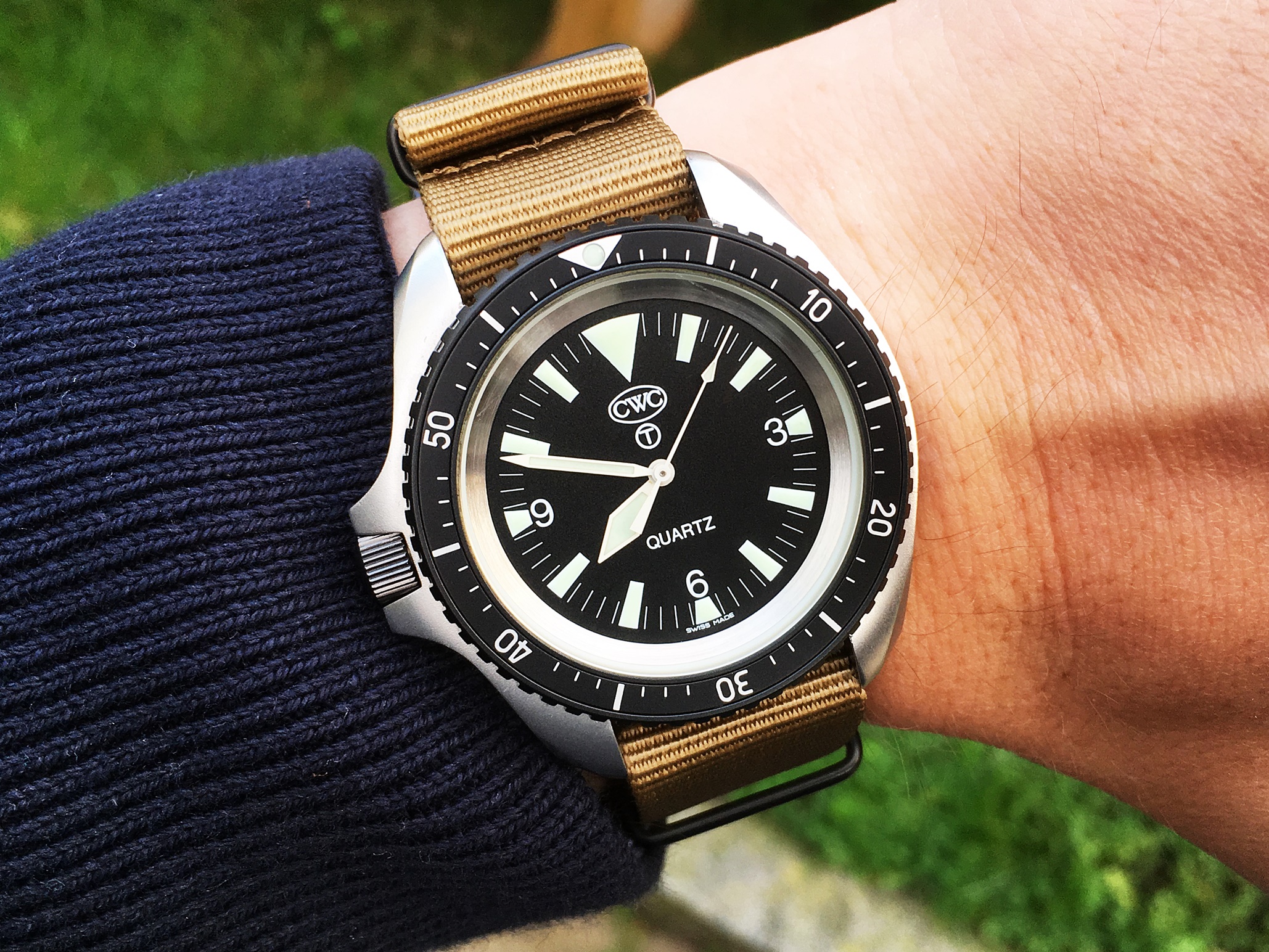 Up and running again!

Oh my God! It took me quite some time but all broken links have now been repaired. Man, this whole Photobucket business was almost driving me insane but now finally all is back to normal and I’ve gotten rid of those scumbags. Some posts like the CWC SBS Quartz Diver, the CWC RN Quartz Diver and the Seiko 7C43’s have also been recently updated with their latest additions along the way. I’ve even managed to scrape together a few new posts and in just a couple of days I will post something I’ve been working on lately that I think is really exciting and that I have been looking forward to very much to officially announce. Perhaps you’ve already caught a glimpse on Instagram?

So keep checking back now a little more often as I intend to speed up the posting. I also plan to post some more fresh content to mix it up a little instead of just looking back into the past.

A huge thank you to all faithful readers! Your encouragement is what drives and motivates me.
Upplagd av aflippersdiary kl. 6:14 AM 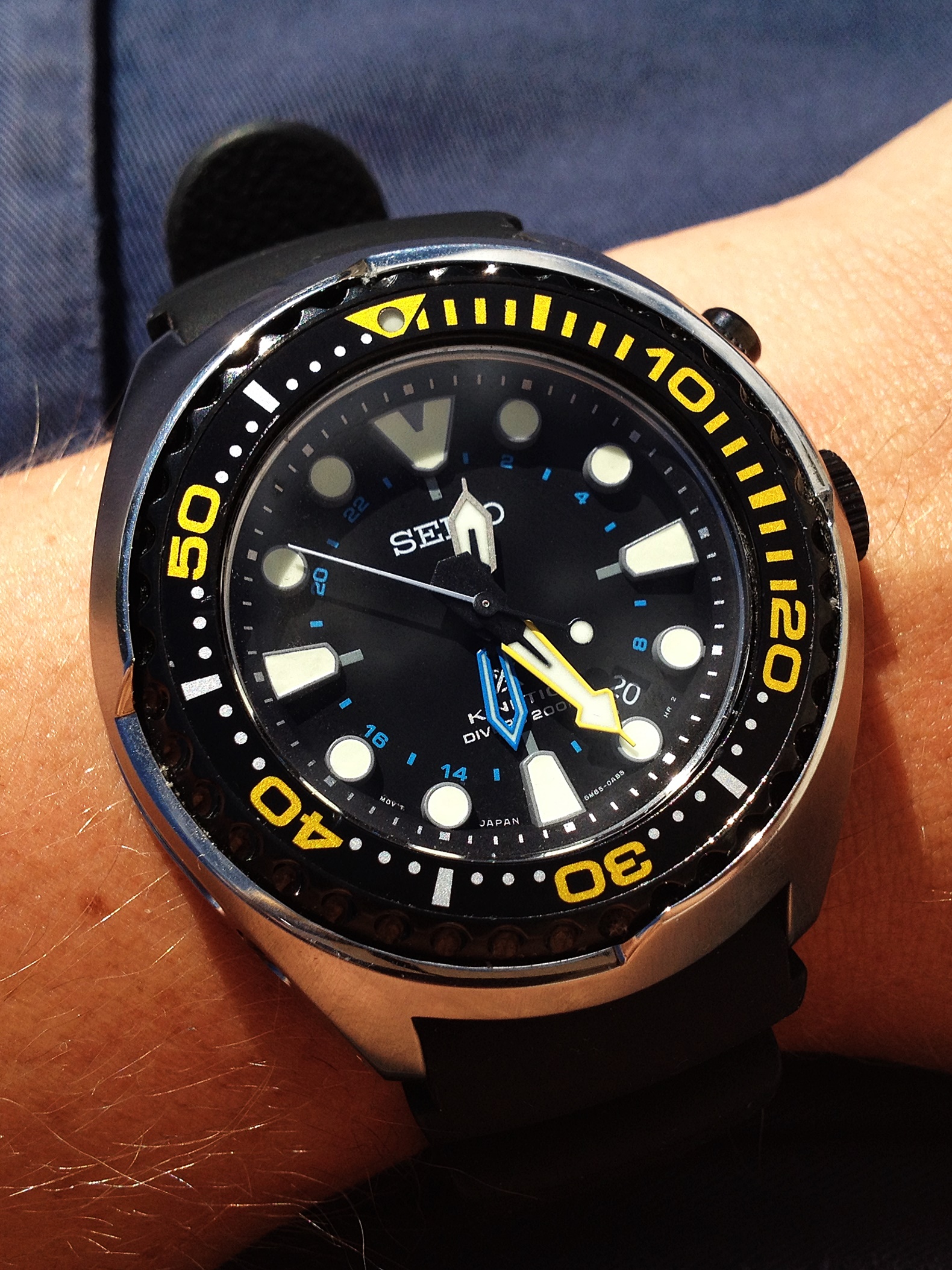 My first Frogman. Bought back in July 2015. Now I finally understood what G-Shocks were all about. They were about the Frogman’s! They really are the coolest and the most badass watches in the G-Shock line-up. Because of their screw down caseback they give a much more professional feel to them. Being much more expensive than regular G-Shock’s is definitely contributing to the feeling of being a better product as well (I know, I’m that easy to fool!). I actually took for granted that the Frogman was going to have a built-in depth-meter and was quite disappointed that it didn't. I thought that might be the reason for the higher price but I guess the price only has to do with a different construction. The latest Frogman's do come with a depth-meter though but the price also tripled. I'm doing my best trying to motivate myself to get one but I'm not quite there yet.

Due to being modified this one came very cheap. Originally it was supposed to have an all clear see-through resin case with a blue print but apparently it is quite common that these see-through cases fade towards a yellowish tone over time. Therefore it has become very popular do re-dye these cases in various color combinations. This one had been given a nice ocean turquoise tone and its letters had been painted yellow. It looked awesome and had a nice summer vibe to it. It was released in the summer of 1998 as a limited edition in a collaboration with the W.C.C.S. (World Coral-reef Conservation Society). The limited edition Frogman’s are highly sought after among collectors and the price you have to pay for the old cool discontinued models makes you don’t want to use them because the minute you do its value just plunges. Buying expensive NOS to collect and cheap second-hand for actual use would be my recommendation.

Funny G-Shocks. I absolutely love them! The more crazy-looking the better. Like I’ve written before: they are like drugs and once you start you only want more and it quickly becomes a habit. Here are two examples of G-shock's I bought just for fun right before going on vacation two years ago. I wasn’t looking for a G-Shock with any high-tech features, I just wanted something durable that would tell me the time. I was more focused on something with a cool look that would pop and I ended up with these two. The golden one made me look like I tried to want to be a rapper and the crocodile skin version looked like it had received a really bad STD. Both of them eventually ended up with my friend Leben when he also was in the need of a cheap beater. First he took the crocodile I think but somehow he lost it after a while. Then he took the golden one but in some mysterious way he managed to lose that one as well. 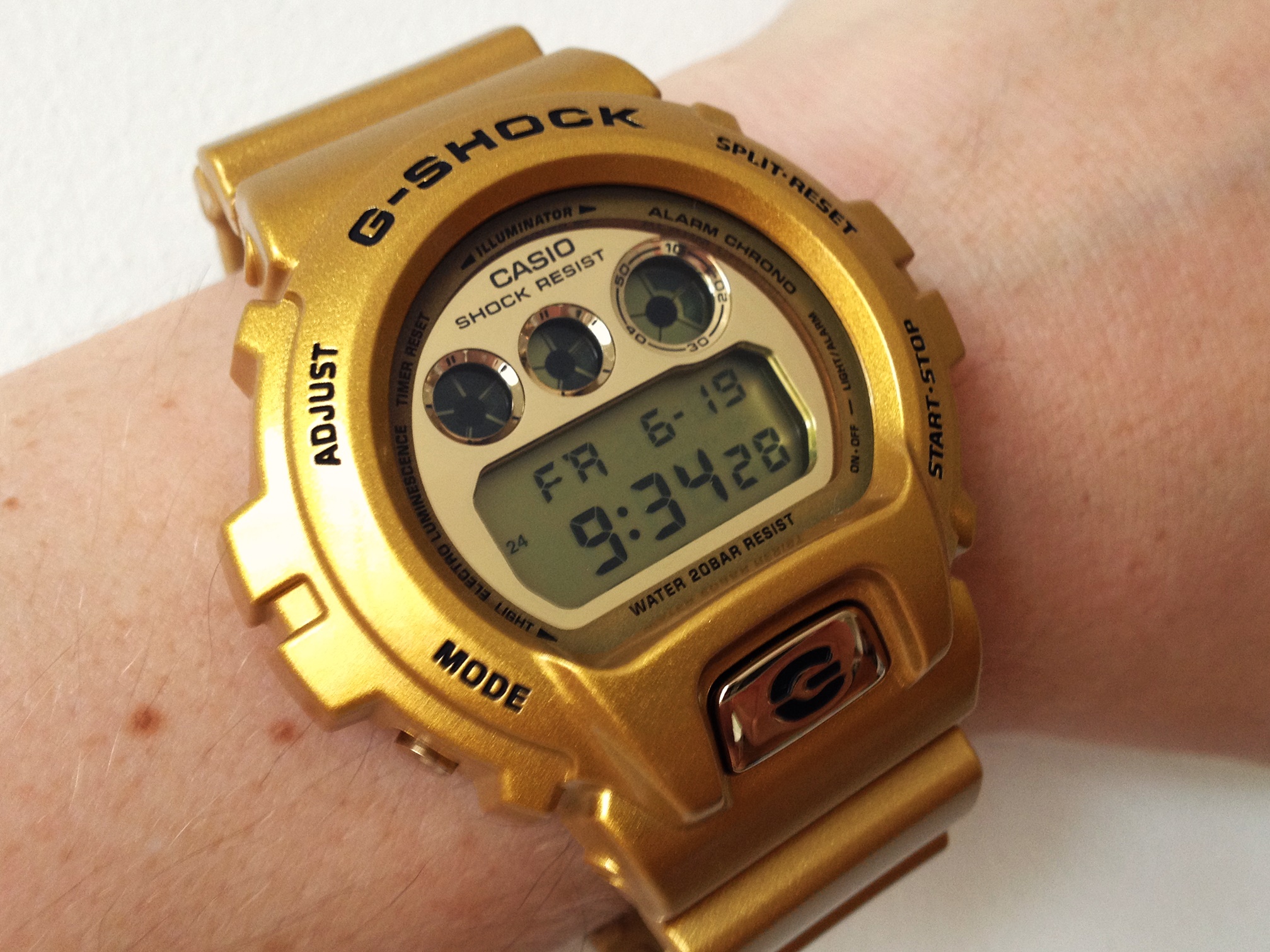 G-shock’s doesn’t always have to be expensive but the cheaper they are they usually lack some of the more necessary features. To me Multi-band and Tough Solar features have become two features that are essential when buying a G-shock.