At first glance the SBCM023 looks almost like a SKX-diver but there are actually quite a lot of details that differ when you break it down. For starters it is much smaller than a regular SKX. 38mm compared to 42mm. And I really think it felt tiny. Childish almost. The thing that makes it interesting in my opinion is the movement. It's a quartz movement with a perpetual calender meaning if you set it up correct you don't have to worry about the date change every second month and it even takes leap years into account which is pretty cool. The lume markes look ridicilous. Like tiny nipples. The bracelet rattled a lot and didn't feel solid at all. I wore mine on a nato strap the few hours it got to spend on my wrist.

I bought mine back in February 2011 for about $230. Didn't like it all. Remember it wasn't to easy to sell either. Today it would have gone like that. Finally a guy from Finland, who was in Sweden for work, e-mailed me and said he wanted it. 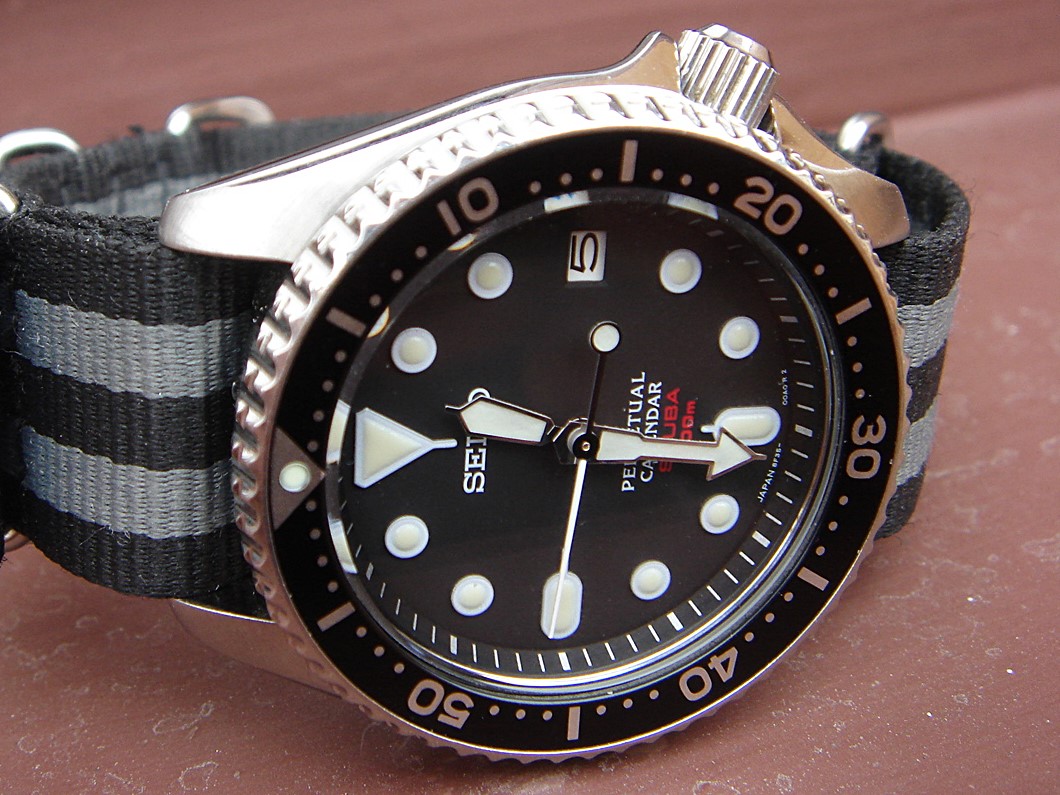 The SBCM023 is a JDM watch and has been quite difficult to find to a reasonable price since it was discontinued. As a men's diver's watch I think it's too small and it suits women or teenagers much better. There also is a pepsi version called SBCM025 and an orange version called SBCM029.

© All pictures by a Watch Flipper's Diary unless noted.
Upplagd av aflippersdiary kl. 9:55 AM

I first came in contact with MKII when googling for watch parts. Back in the days MKII sold a lot of parts for Seiko SKX-divers and various other watches with ETA-movements that could easily be changed. It turned out that MKII actually had an AD in Sweden located in the very southern parts of Sweden. Back then they carried all the different versions of the Blackwater, Stingray and Sea Fighter in stock. I really wanted to buy one but didn’t know which one. But then one day there was an ad about the upcoming LRRP. The influence from the classic Rolex Explorer II 1655 was what got me hooked. A classic design in a case with all the features from a modern diver’s watch. Perfect! There was only one problem. It was almost twice as expensive as the other models. Damn.

Anyhow. I started looking for a used one and one day in February 2010 a well known Swedish watch enthusiast had put up one for sale. It was still quite expensive so I sent him an offer and crossed my fingers. To my surprise it totally backfired and he felt very offended and started to ignore my e-mails even though the watch never got sold. It wasn’t until almost a year later in January 2011 when he bumped his old for-sale-ad, were he also lowered the price to the same offer I had given him in my first attempt, that I tried to contact him again. This time he replied! We met up and I finally got to buy the watch. It turned out the seller was a really interesting person with a true passion for watches and I’ve purchased more watches from him during the years over some funny conversations.


I really liked the LRRP. Quite large with its 42mm but it wore well. I preferred it on the rubber. I’m allergic to the kind of “smooth” end link pieces this bracelet has. Two years later I found another used one to a much lower price than the first one and had to buy it just for the cause. Removed the bracelet immediately and put it on a Victorinox Dive Master rubber. Looked great in my opinion. 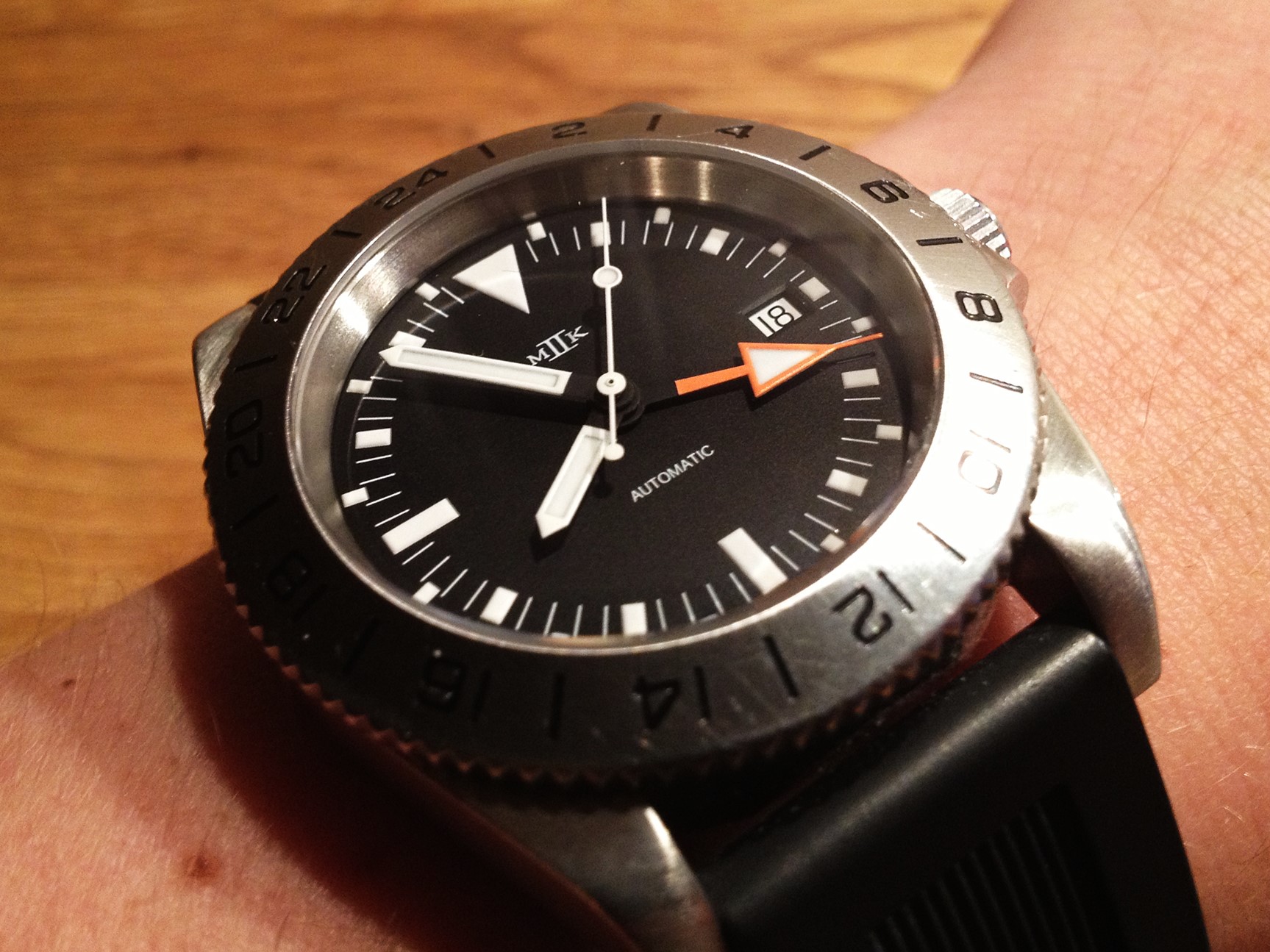 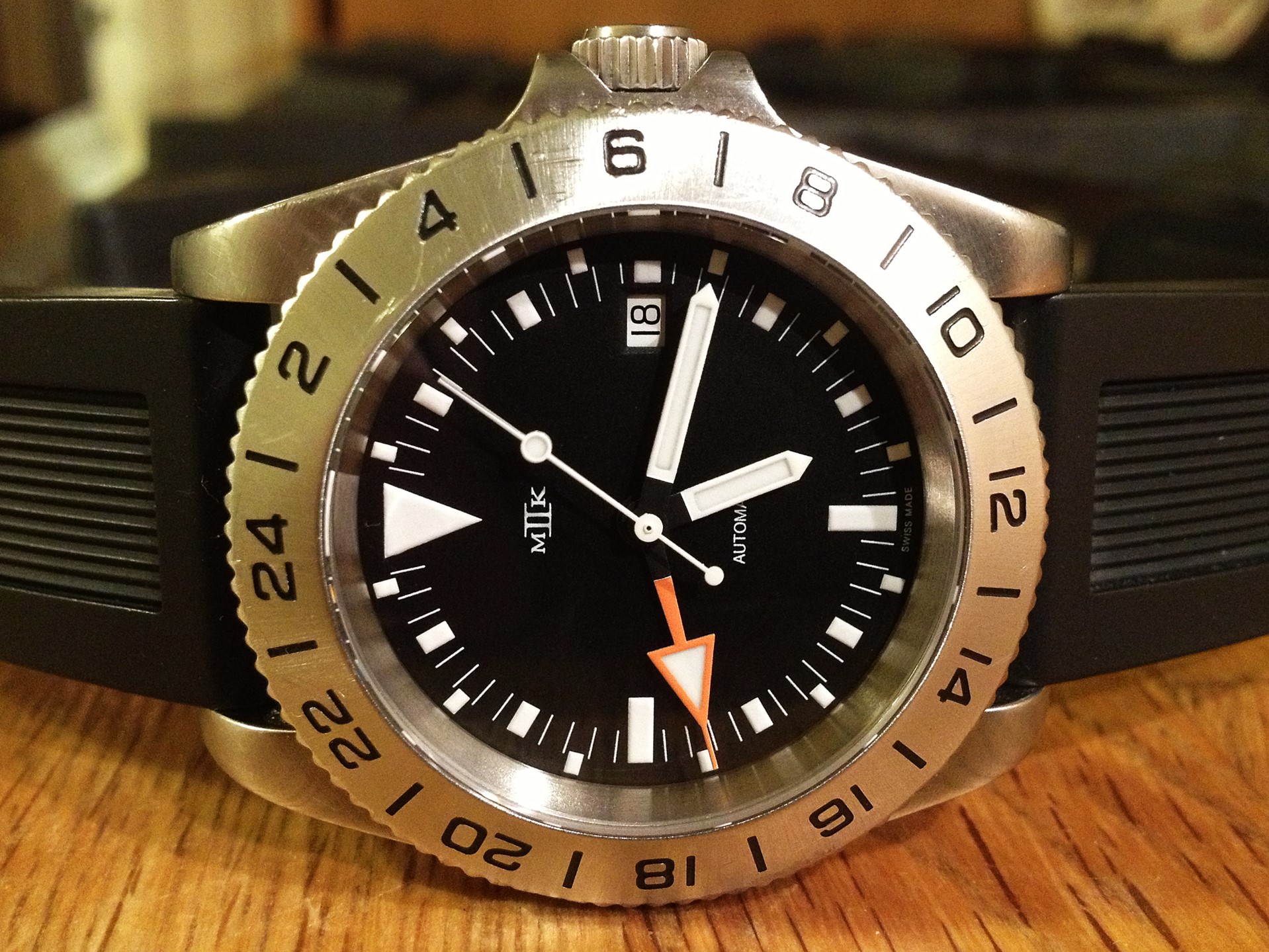 I dig the MKII line-up and I’ve had the majority of them. Alright, they might be homages with a pretty close resemblance to the original but they are not copies. The quality is top notch compared to the price. I’ve never had the opportunity to purchase a new one directly from the legendary Bill Yao, founder of MKII Watches. I’ve always missed out on the pre-orders and have therefore searched for used ones. The models that are no longer in production are becoming ridiculously expensive on the second hand market and if you come across one to a decent price it might very well be a good investment.


© All pictures by a Watch Flipper's Diary unless noted.

You just got to love those analog/digital multi-function watches. Especially the Aerospace from Breitling. What a watch! It’s almost like you turn into a fearsome fighter pilot the second you put it on your wrist. My first Aerospace was the Repetition Minutes and was from the late 90’s and came on a black Hershey rubber. I really wanted one with a bracelet and the UTC-module but this is what I found to a decent price when I decided to start looking for one.


I didn’t feel that the rubber look was working on this non-diver’s watch so I went out and bought a leather strap for it instead. Looked a little better but didn’t do the trick for me so I flipped it and decided to wait for a two tone version with the big bold italic numbers on the dial to show up. 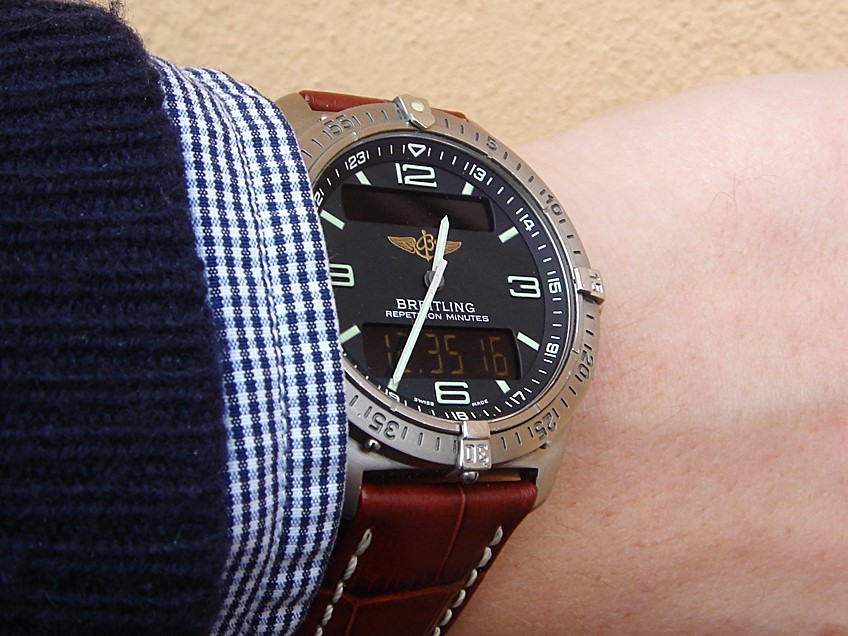 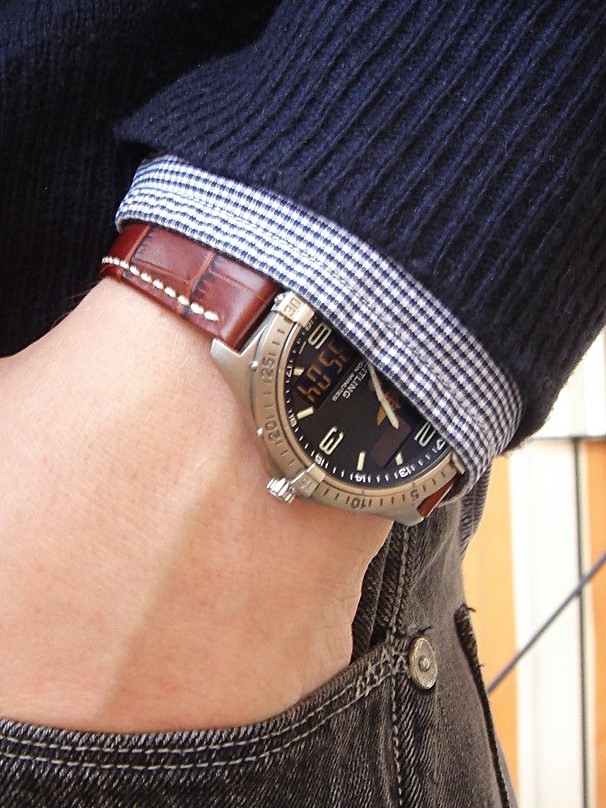 The Aerospace is really user friendly. It takes a little while to get a hold of the twisting and turning of the crown but once you get the hang of it the maneuvering of all the functions is easy enough to figure out without a manual. The Aerospace is a great everyday watch but especially an awsome travel companion and if you don’t have a hang-up on automatic/mechanical-watches-only then it’s perfect.