When I recently gave you the story about all my Seiko 7548’s I also couldn’t help expressing my feelings about how good all the things from the early 80’s were. But as a matter of fact the second half of that century only got better. I know, it’s insane!

Because during the late 80’s was when my favorite G.I.JOE characters were introduced, the NES was released in Sweden and Guns n’ Roses recorded Appetite for Destruction. Those are just a few important details that are responsible for shaping me into the person that I am today. But during this era something else  highly important was created, something I didn't get to discover until thirty years later, and that was Seiko's becoming legend; the 7C43 Professional Diver, which basically was a 7548 but with an upgraded movement and with a 200m depth rating thanks to the new solution of the screw down crystal. The 7C43 is therefore even a little more heavy duty than its predecessor. What makes the 7C43 extra special is its unique black and white hand-set which is a rather small change but it gives the whole watch a new appearance. The toolness-factor of this watch is going through the roof and if I’m not mistaken I actually think that the case of the 7C43 might be a little beefier compared to the 7548 which only adds more points to the already high tool feeling. The first time I saw the 7C43 was probably sometime around 2010/2011 when I was browsing through Molle’s old homepage about his mind blowing Seiko collection. That’s when I found this amazing 7C43-700A (the pepsi version) on a jubilee bracelet. It just looked so damn good. I knew right there and then that this was a watch that was something I just had to have one day.

But it wasn’t until February 2014 when I finally got my first 7C43. Unfortunately it wasn’t the pepsi version but I had to start somewhere. It was purchased together with my second 7548 (#212) from a well-known seller in the US and I was lucky to get a good deal when I bought both of them. I knew nothing about the 7C43’s and this particular reference turned out to be manufactured in Korea and the dial print had a more burgundy red color compared to the Japanese version which has a more orange tone. To my big disappointment I never took any pictures of the case back so I’m not sure about the exact reference but from what I have read it probably just was a regular 7C43-7000 but made in Korea. Anyhow, it felt really cool to finally own one of these legendary often talked about watches. But from what people told me I realized the Korean version wasn't very sought after and that the Japanese version was the one that was rarer of the two so I ended up selling mine trying to find one made in Japan instead. I’ve later heard the opposite but I’m not sure which statement is true.


My second one was the 7C43-700B and was bought about a year later in February 2015. Can’t seem to remember where I got from though. It was made in Japan and had the cleaner looking “Professional only” dial with less text. I mostly wore it on a 22mm Isofrane rubber. What I really can’t figure out though is its reference number. From what I have learned the 700B-version are supposed to have the rare white dial but apparently that can’t be correct unless I had a modified version with service dial.


The third one was in good shape but it had an aftermarket bezel insert. Got it in October 2015 from a seller in Hong Kong.  The dial was pretty nice but some of the print was beginning to fade. One day I noticed some fog on the inside of the crystal but Magnus helped me out replacing all the old gaskets making it waterproof again. 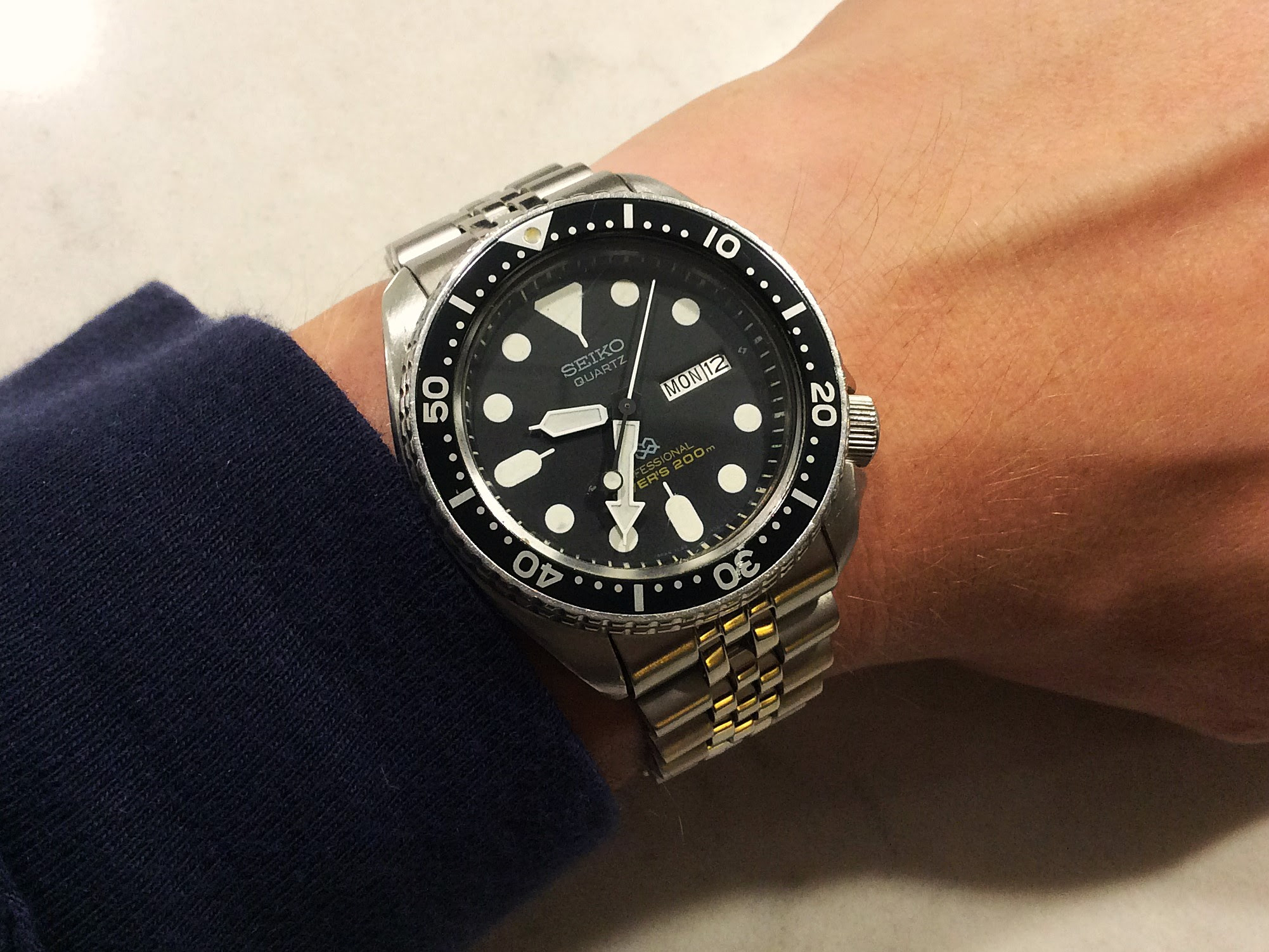 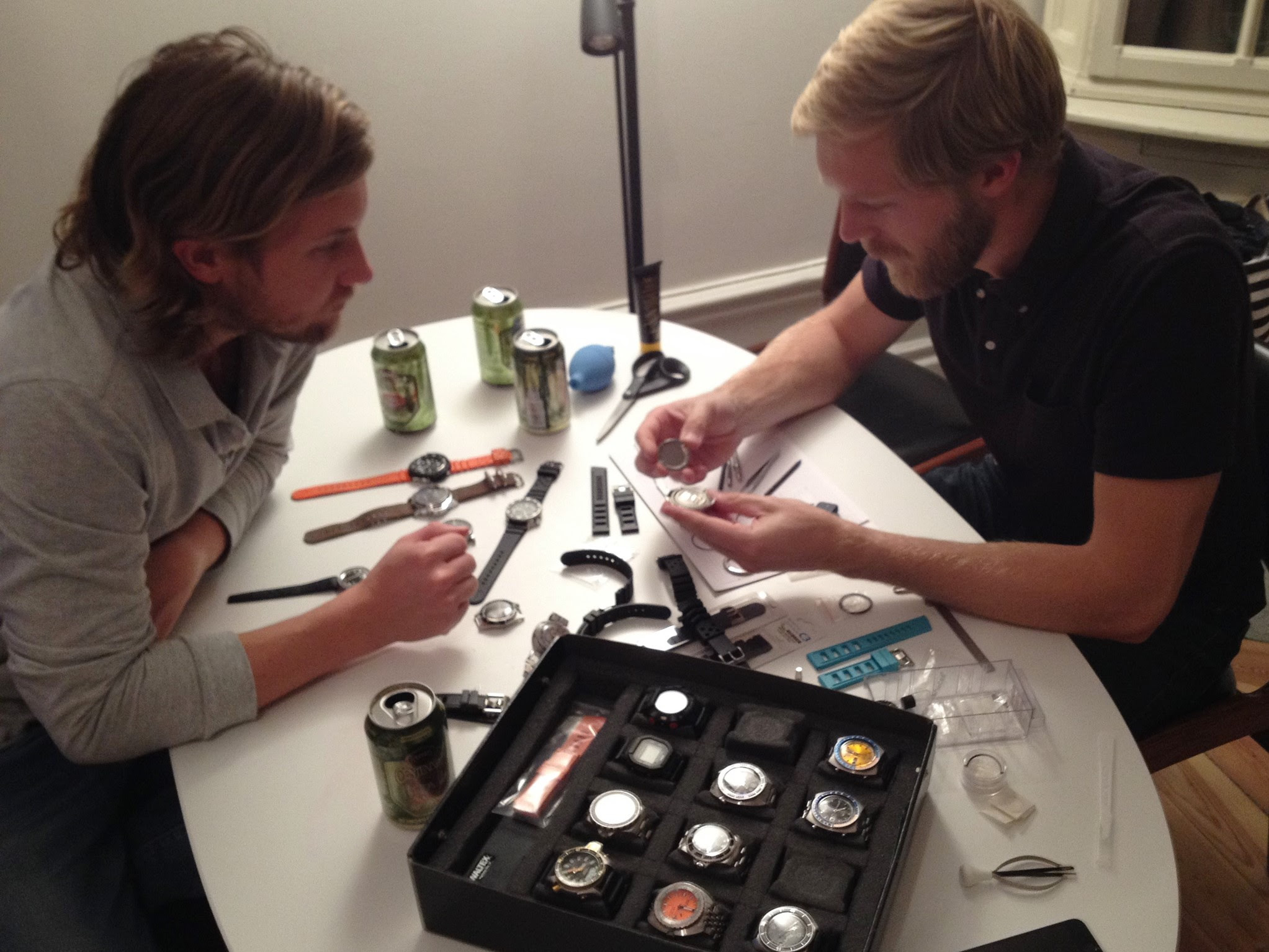 The fourth one was probably the nicest one of all the ones I’ve had. It was all original and the bezel insert had a beautiful even patina. The print on the dial was great and the luminous indexes and hands were all white and flawless. Not a single mark! The only thing that didn’t make it 100% perfect was a small dent on the side of the case but apart from that it was stunning. This really was one of those watches I never should have sold. God I want this baby back! 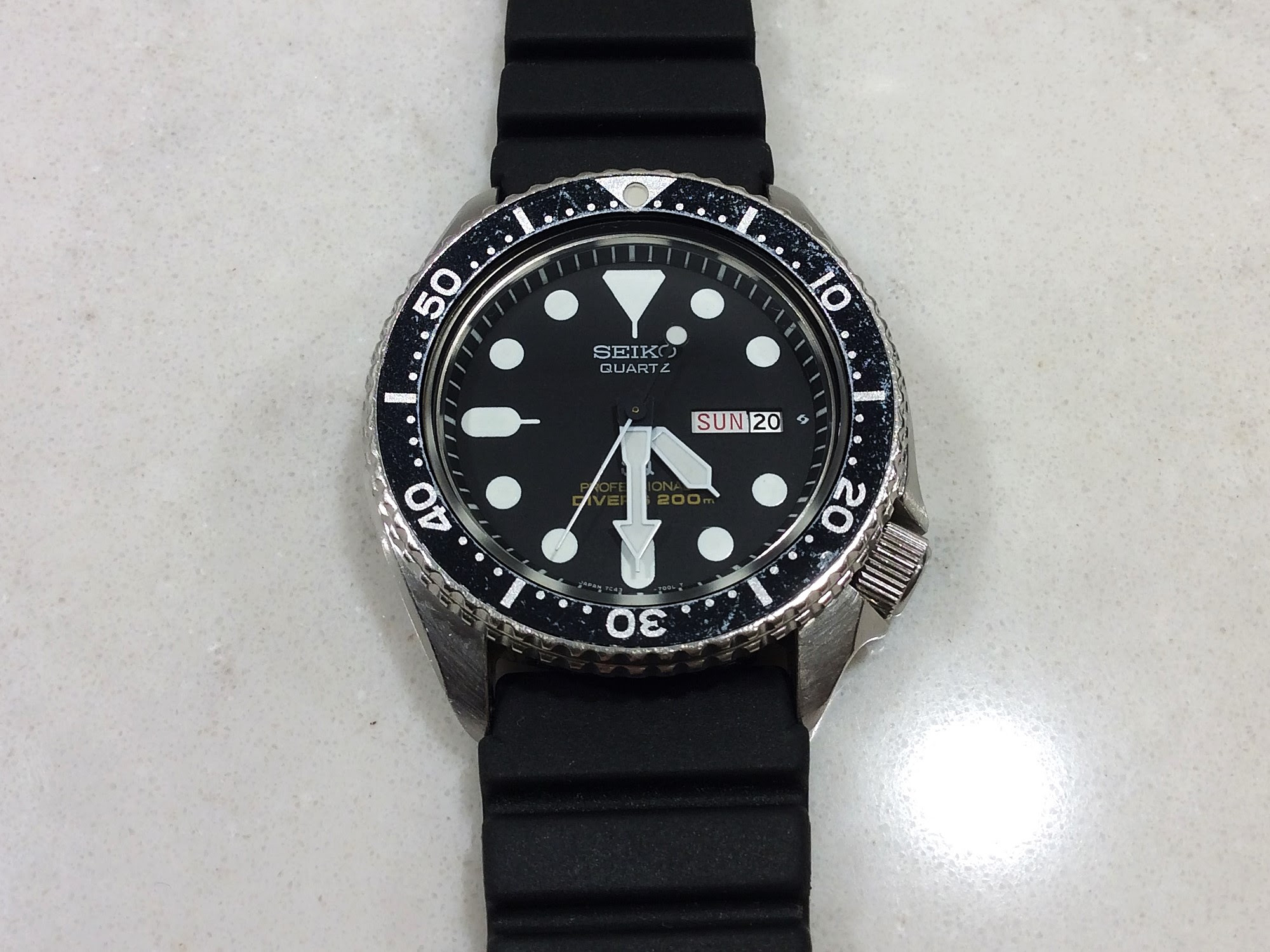 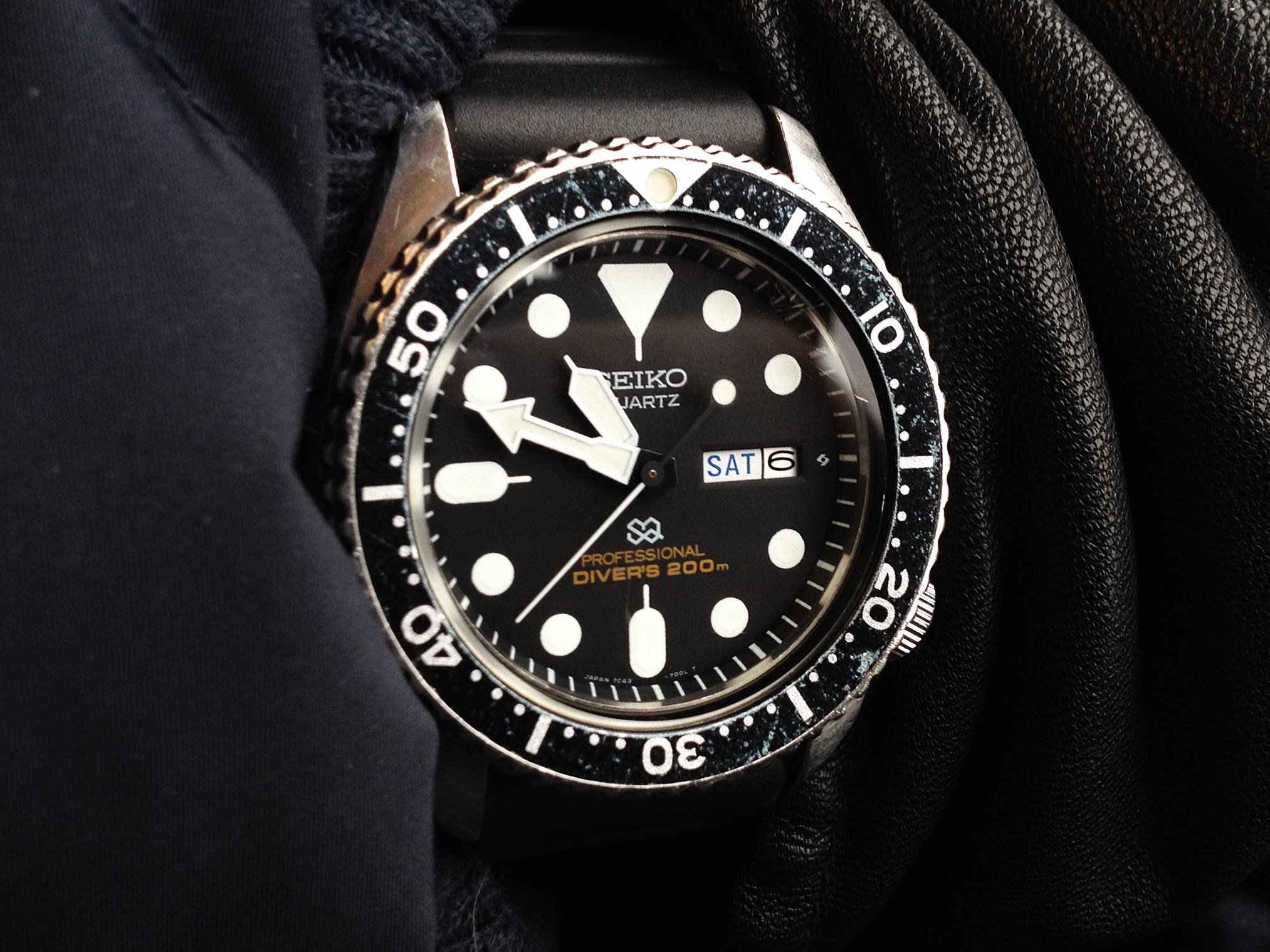 In June 2016 I came across my fifth one. This was the 7C43-7010. Up until then I hadn’t cared very much for the “Professional only” dial but I’ve actually ended up liking this dial version just as much. Just like the fourth one it also happened to be in a great condition. This one eventually ended up in my watch buddy Stefan’s fantastic Seiko collection. 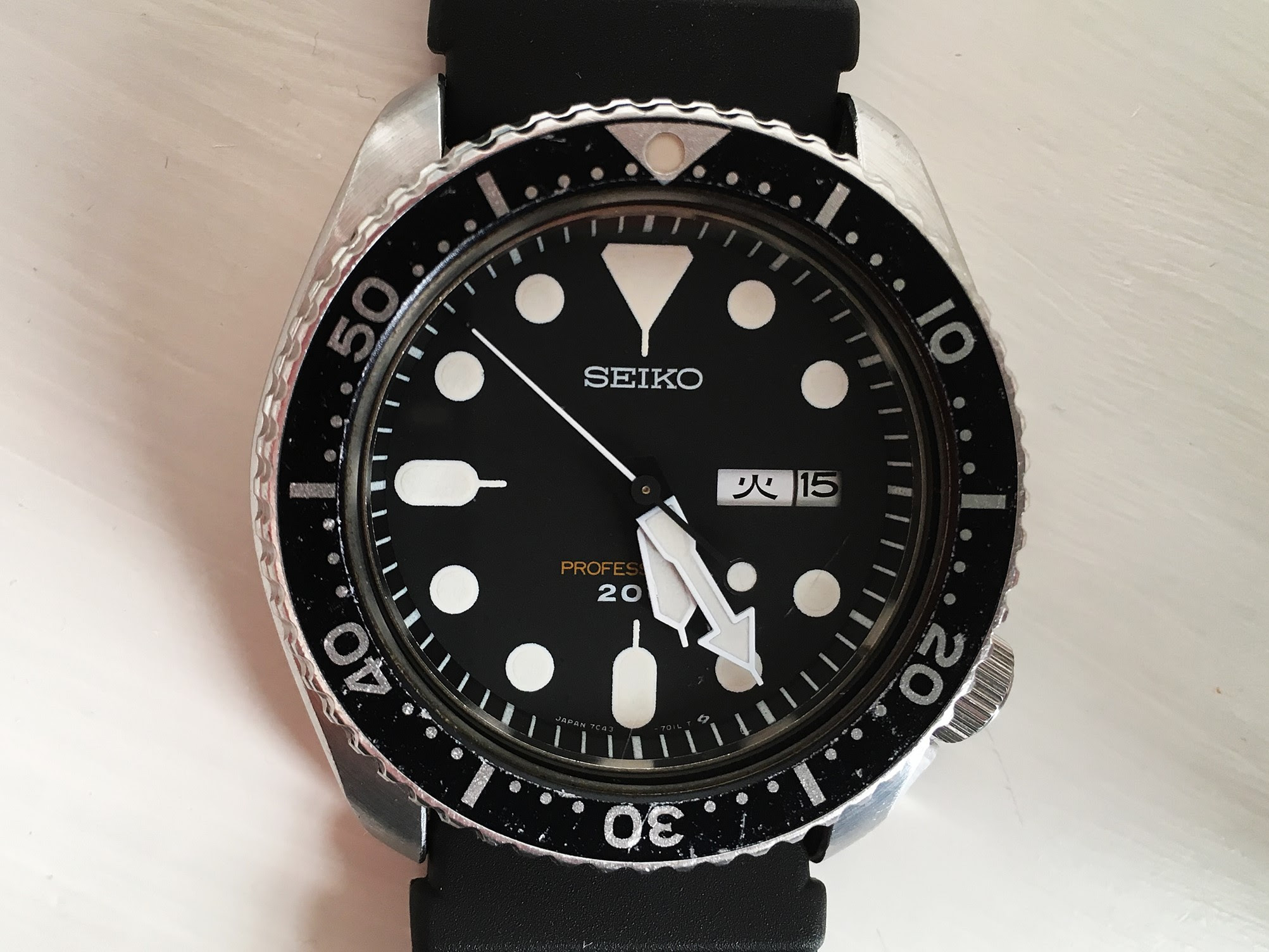 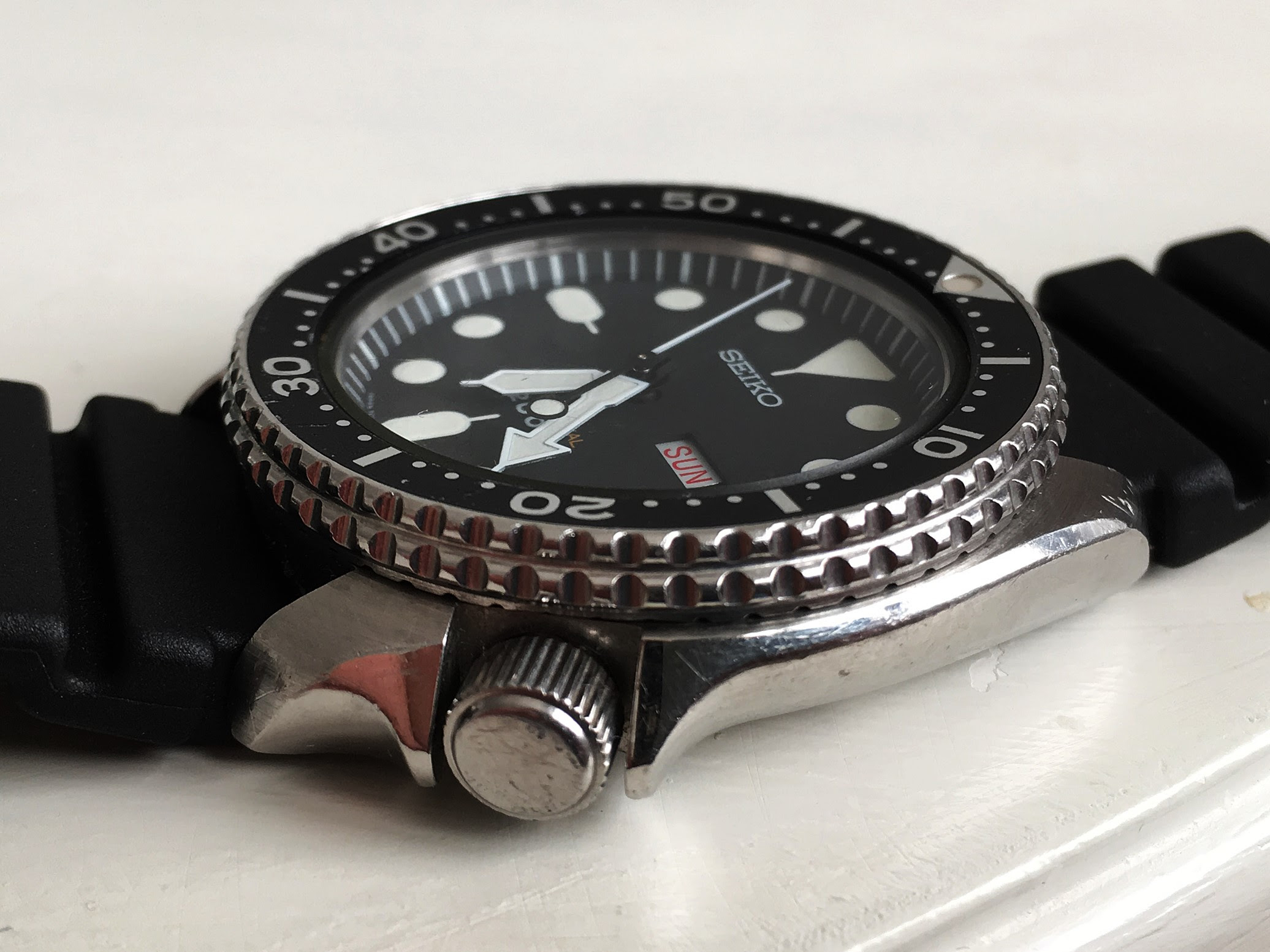 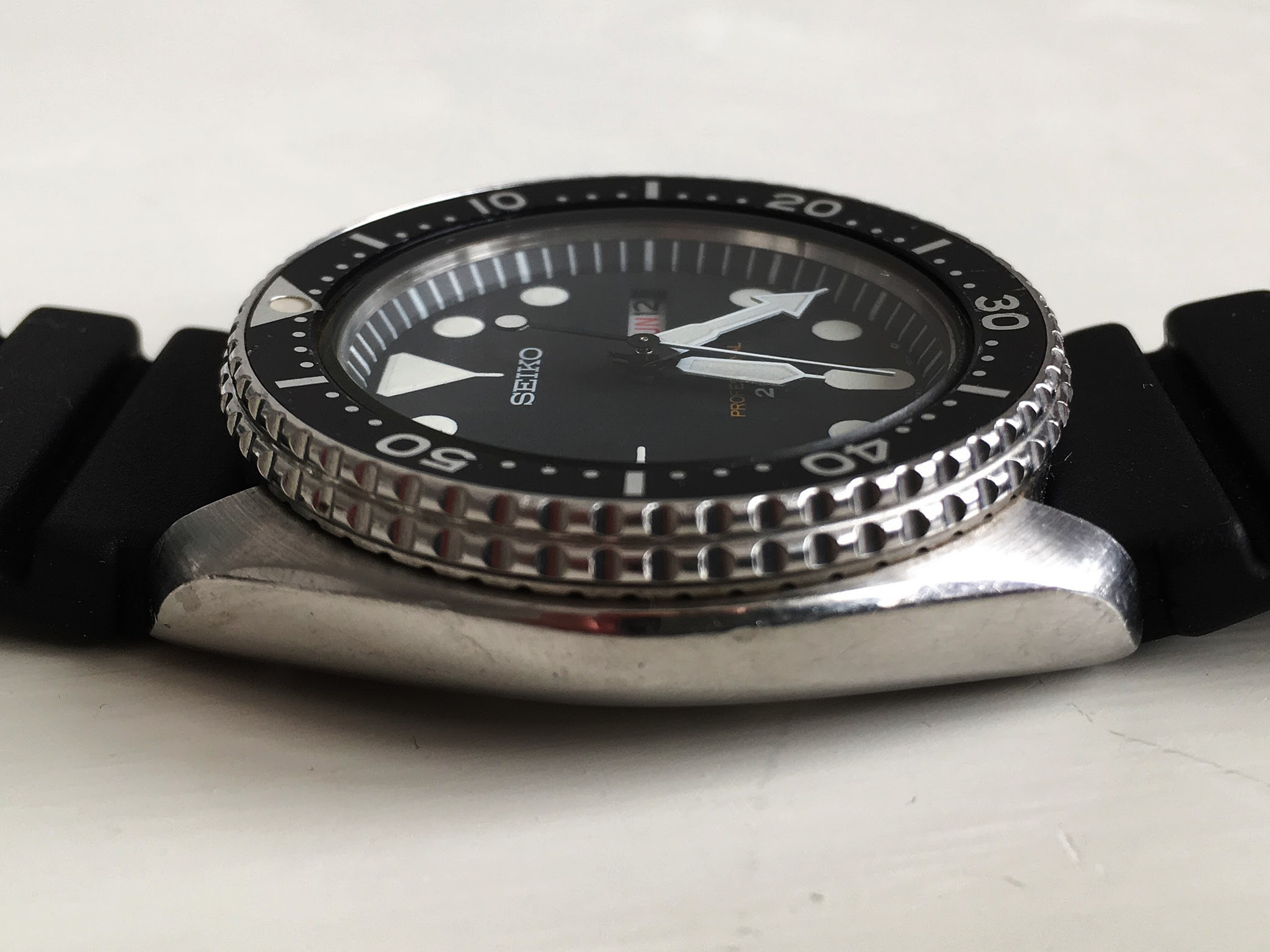 The last one I had, number six, was purchased on eBay. I’d missed out on so many 7C43’s up for auction that I had completely given up hope ever finding one on eBay without being ripped off. But then suddenly, a Monday morning in June 2016 on my way to work, it was there; a 7C43-700A to a reasonable price with the buy-it-now option. It even had the make-an-offer option! I began to read the description “all original, recently serviced…” and the list went on. Everything was just perfect! Was this too good to be true? OK, it was really quite worn but that just looked cool, and the rubber it came on wasn’t original but what the hell. I was going to put it on a Bonetto 284 rubber anyway. I was hesitating. Why? All I had to do was to click it home! Finally I decided to make an offer. Said and done. I put the phone in my pocket and tried to think of something else. Impossible! What the hell was I doing? Was I going to miss out again because I was too cheap to pay the buy-it-now price and let someone else steal it right in front of my nose? Hell no! I yanked my phone out of my pocket and tapped the buy-it-now button. Relief washed over me in an awesome wave. The pepsi version of the 7C43 was mine at last. 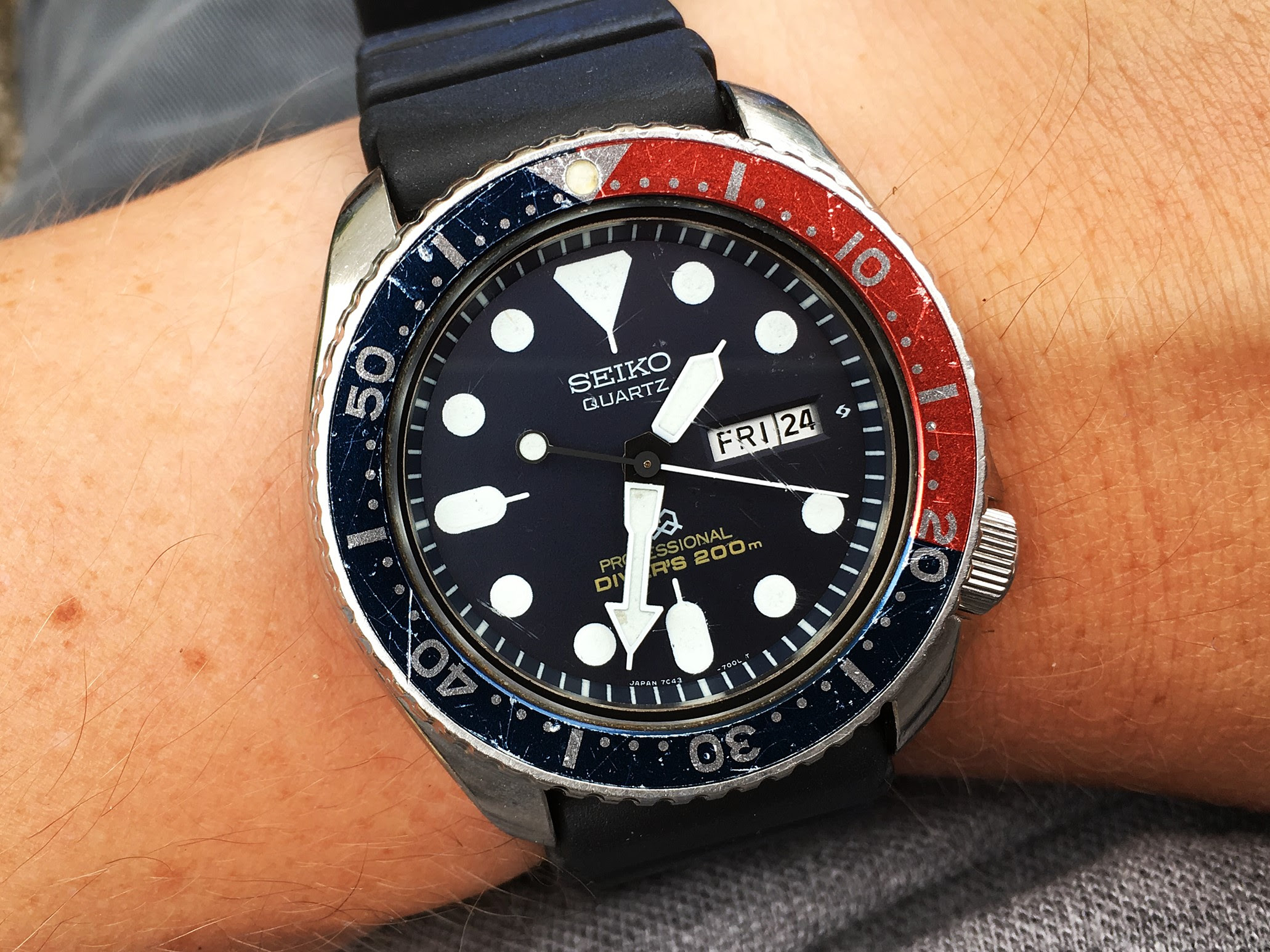 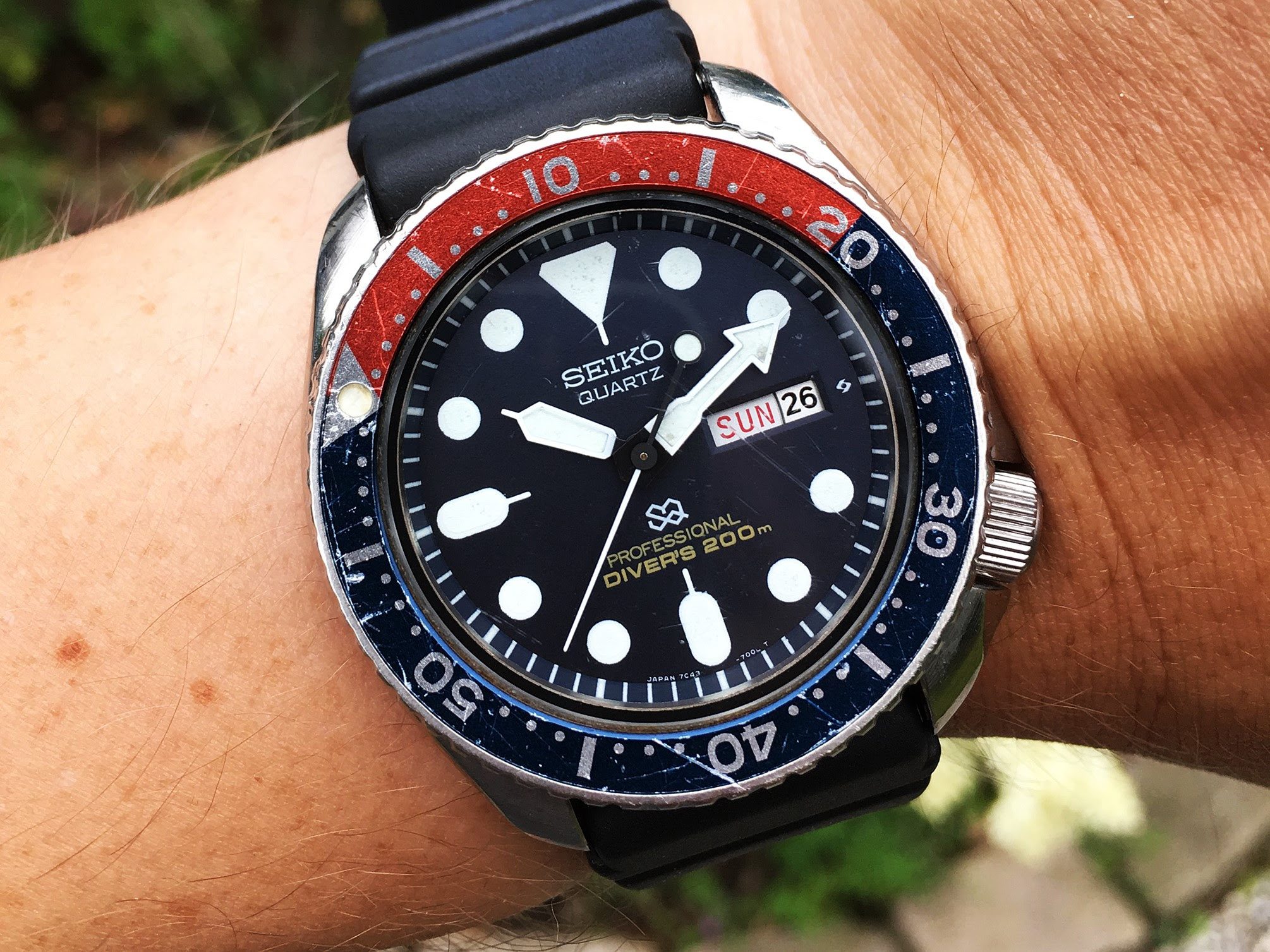 The 7C43-700A turned out to be not as cool as I had hoped for. My expectations had been built up over so many years that it just couldn’t live up to them. But finding it and getting it home was important to me. That was satisfaction enough.

To sum it all up; the Seiko 7C43’s are just awesome. Plain, simple and heavy duty. You can still get them to a reasonable price which makes them fun to keep searching for.

Gah! I came across this perfect 7C43-7010 from April 1991 and I just couldn't say no. I wasn't searching, I swear, it pretty much fell into my hands so what could I do? The only defect was its bezel that didn't click so I had to purchase a set of spare click balls and a spring. Ended up trading it for a Seiko SBDJ013. 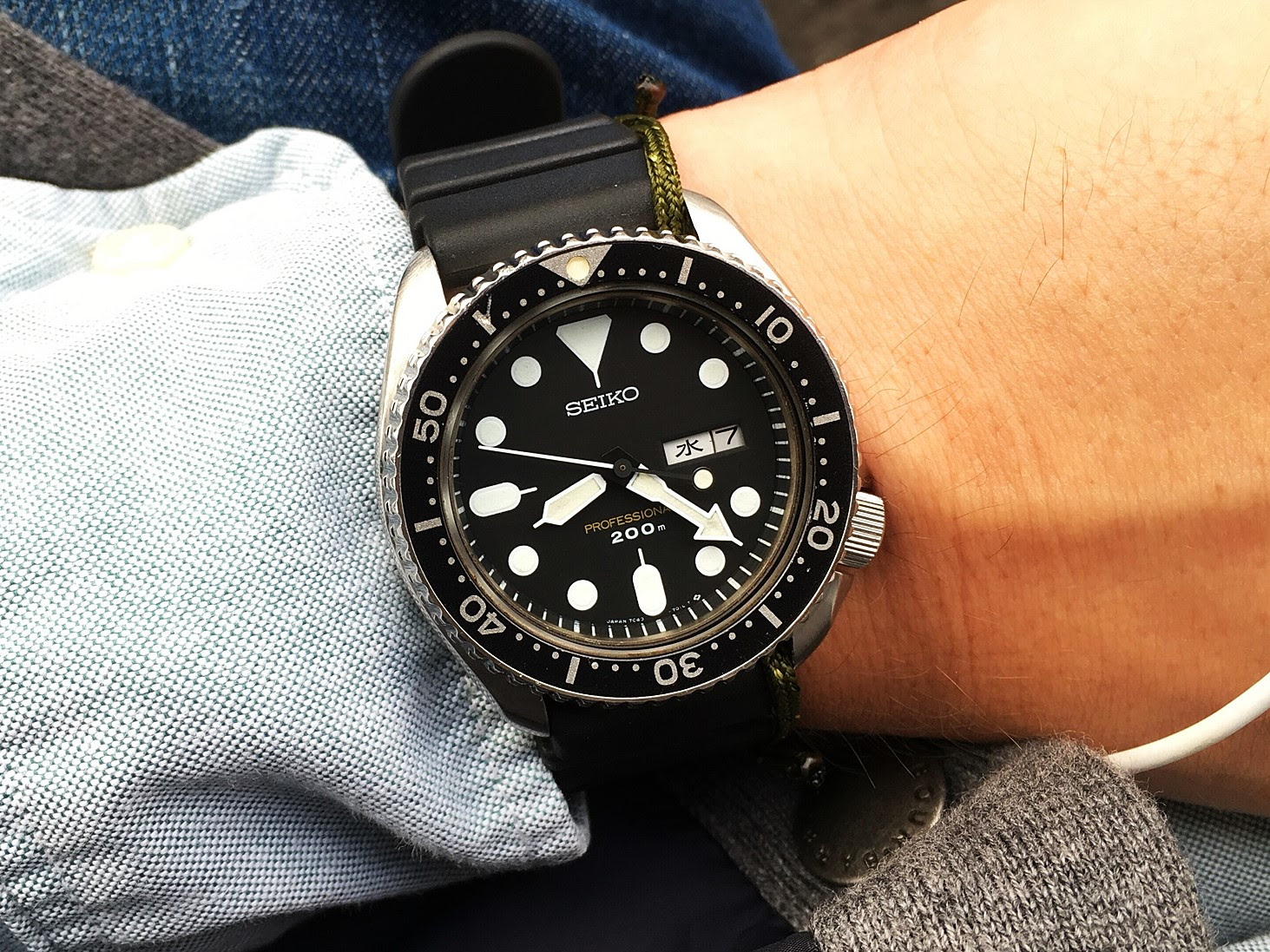 Stumbled upon another 7C43-700A in the beginning of this year. This time located in Romania. Lots of patina but still looked very nice. Impossible to resist. Wore it a few days before flipping it away. Everything was good about it except for the crown which was pretty hard to turn. Probably something with the gasket. It ended up crossing the border and ended up in a Norwegian collection. 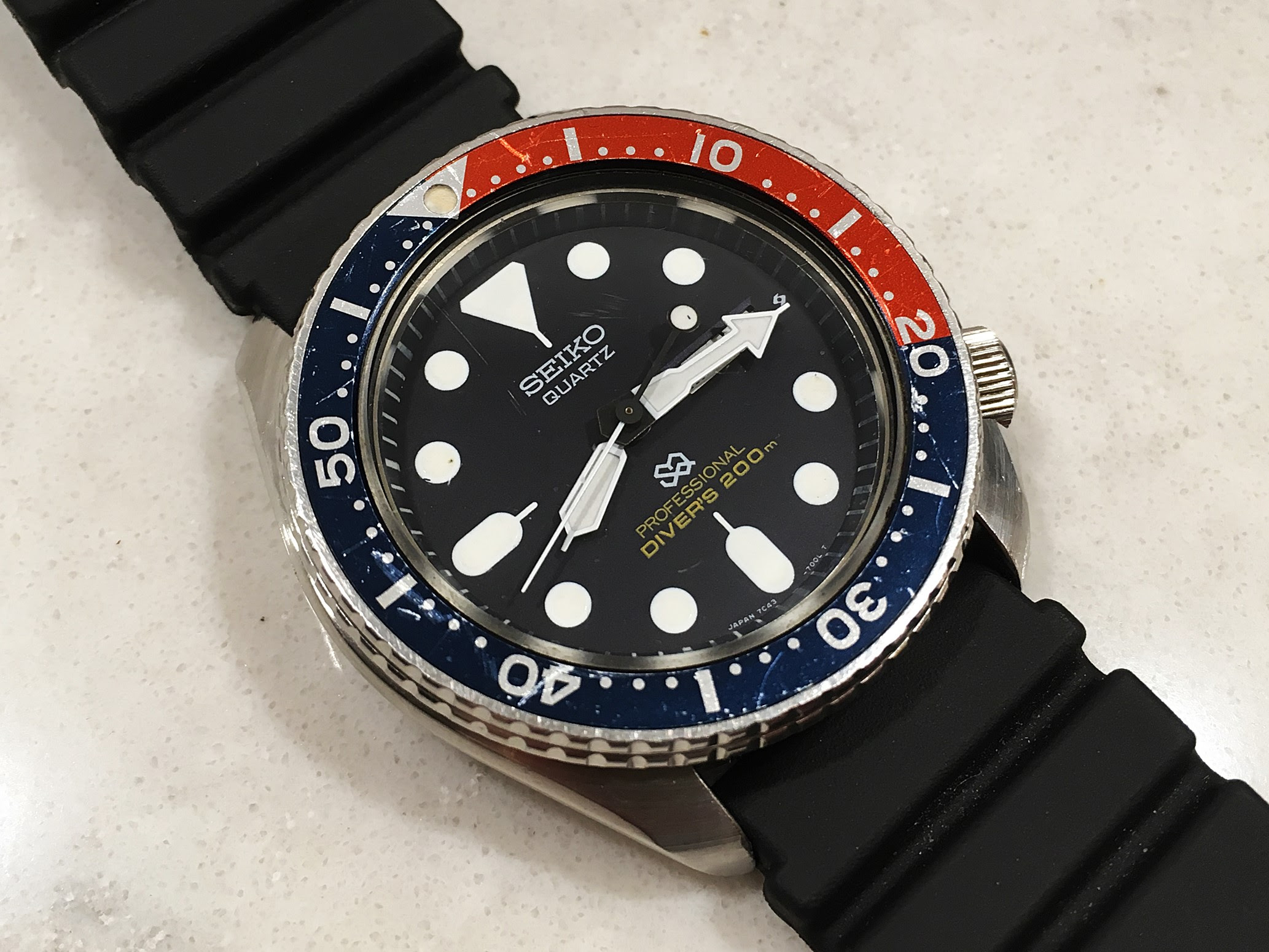 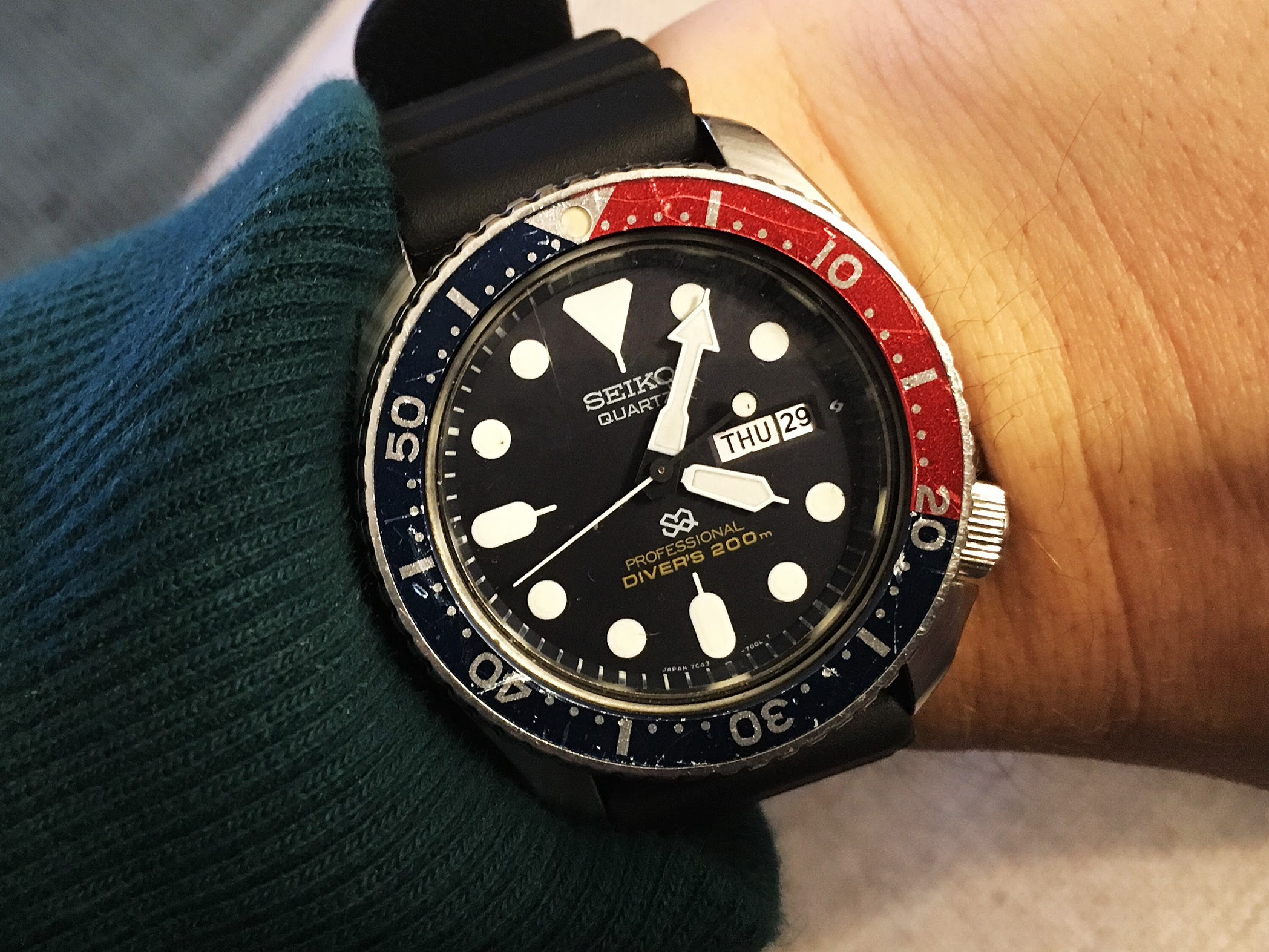 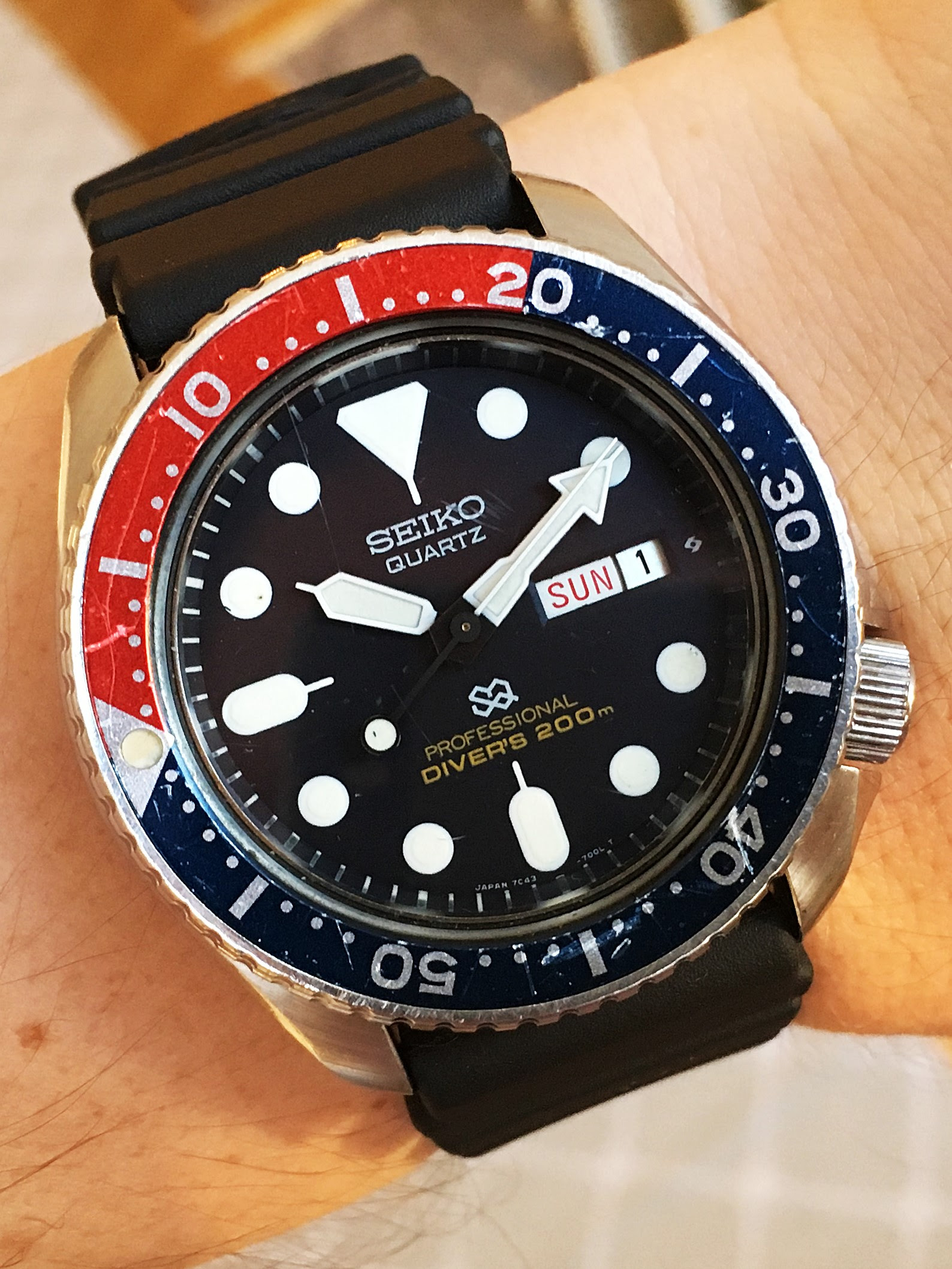 Have I had enough yet? Nope, don't think so!

This might be my longest blog post and I can't really see an end coming to it. I guess I will just keep updating it as long as new 7C43's keep coming in. The two I'm adding this time were two stellar specimens that stayed with me for a longer period of time than any other 7C43 have done in the past. First I managed to get a hold of another Korean version which I had serviced with new gaskets and battery. It was in a fantastic condition and was worn on an all brushed jubilee. Then a third Pepsi version came into my hands and I set it up with an all brushed jubilee as well. Its dial had an almost purple tone which looked amazing in the sun. I switched back and forth between those two watches a lot during the winter and spring of 2017. It took a while to sell them because this time I decided I wasn't going to part with them unless I got paid what I felt they were actually worth.