OK, so it’s in the middle of April 2012 and I’m on my way home from Chicago. Someone might remember the story from the post about the Doxa 750T; when I was waiting every day for a week for a Doxa 600T to arrive, which turned out to be lost at the Fedex hub in Memphis and instead of being delivered to my hotel it showed up at the seller’s house who’d by mistake got it in return. I was furious when I understood what had happened and when I realized I was going to fly home empty handed. Back at the O’Hare airport, waiting for our delayed flight, I spent what felt like hours walking back and forth in that endless boring white corridor (I think it was terminal 5). I’m usually in a bad mood when travelling and adding the fact that I’d missed out on a watch I really wanted and a delayed flight, to my already bad mood, must have turned me into an awful travel companion. My wife must have hated me. But somewhere in that depressing hallway I finally managed to get a hold of a decent Wi-Fi connection and when I found this 1200T Professional for sale I didn’t care about the off proportions (or any other reasons why I actually didn't like the 1200T). I just wanted an orange faced Doxa. To my great luck it was located in Stockholm and I even managed to arrange that I could buy it just a couple of hours after we'd landed. The fact that I had a watch waiting for me at home made the return flight bearable. If that’s not a sign of a serious addiction I don’t know what is. 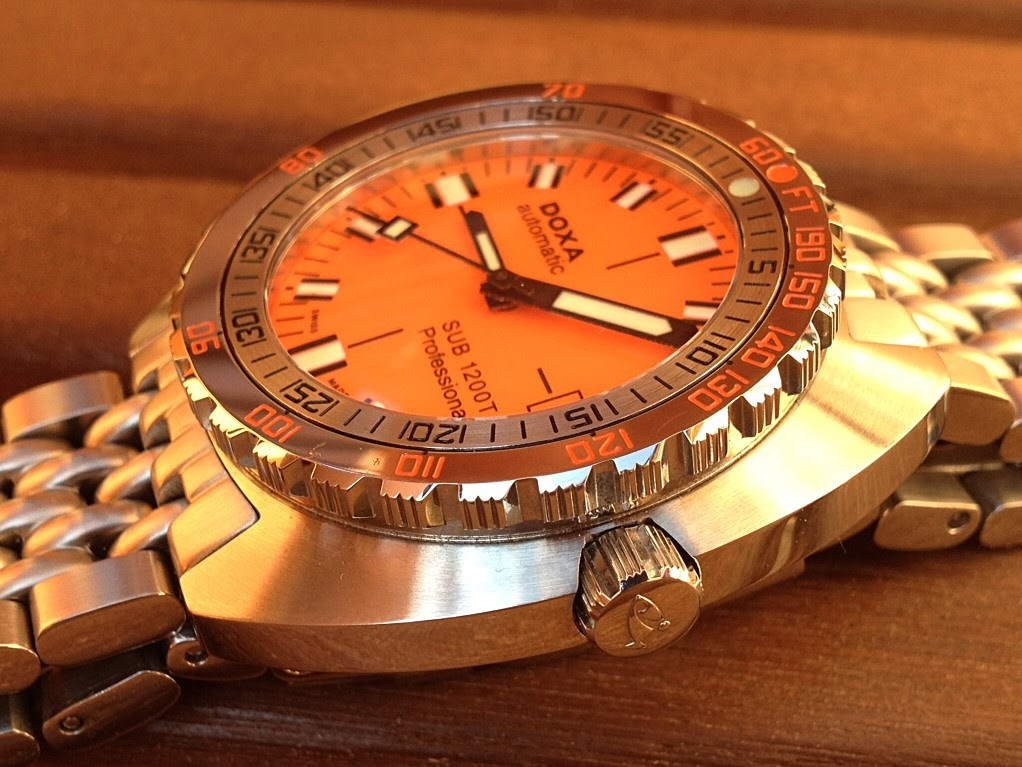 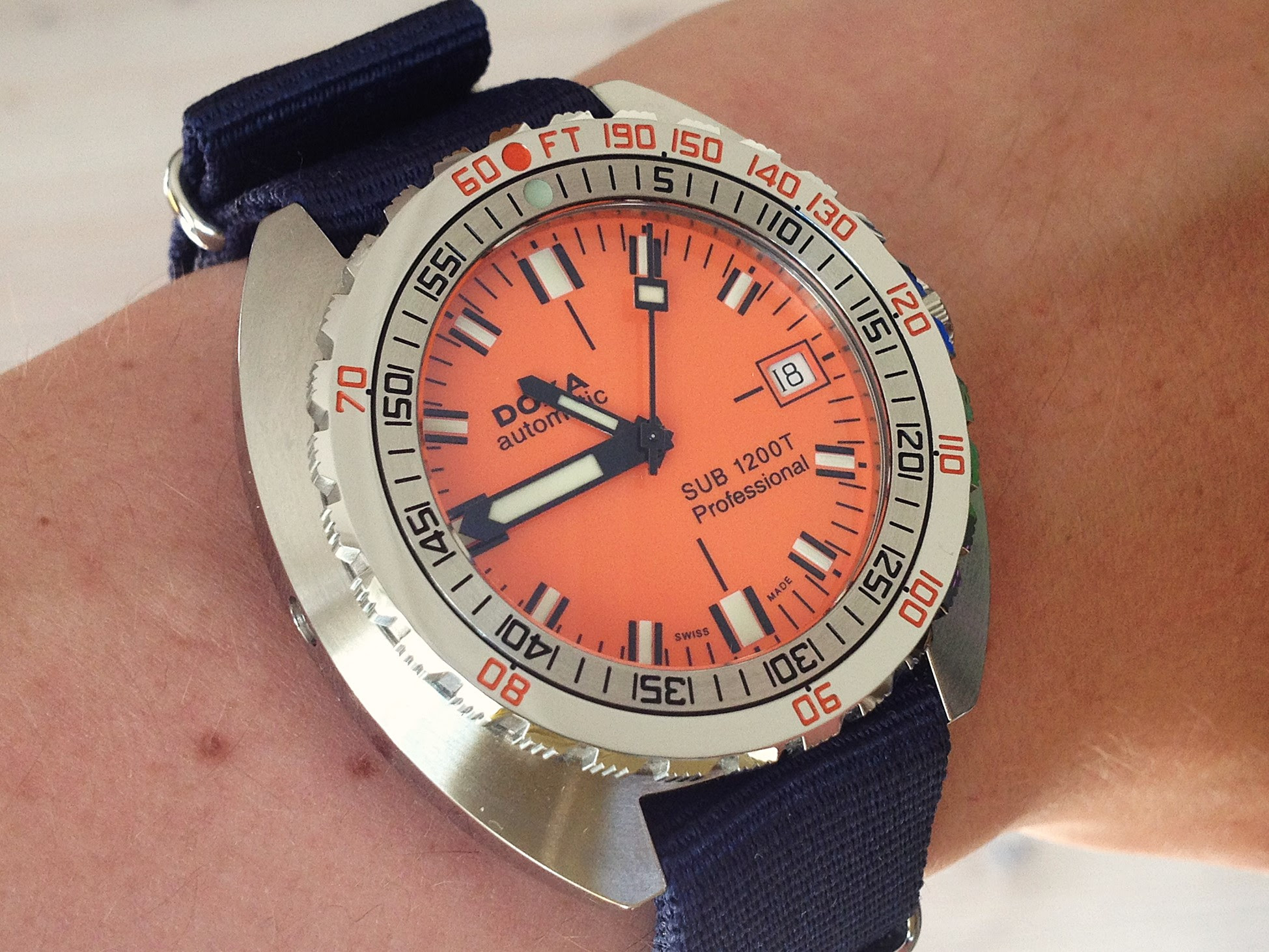 The 1200T is a great looking watch but as I’ve mentioned before in my other Doxa posts, the thickness of the 1200T makes it a little too high and it doesn’t sit as good on the wrist as the 600T or the 1000T. Another detail I’ve discovered I don’t like is the design of the crown (a flaw it shares with the 1000T). The crown on the 600T though is perfect. Just how it’s supposed to look. I kept my first 1200T for about two months before I sold it. It was a full set in great condition. 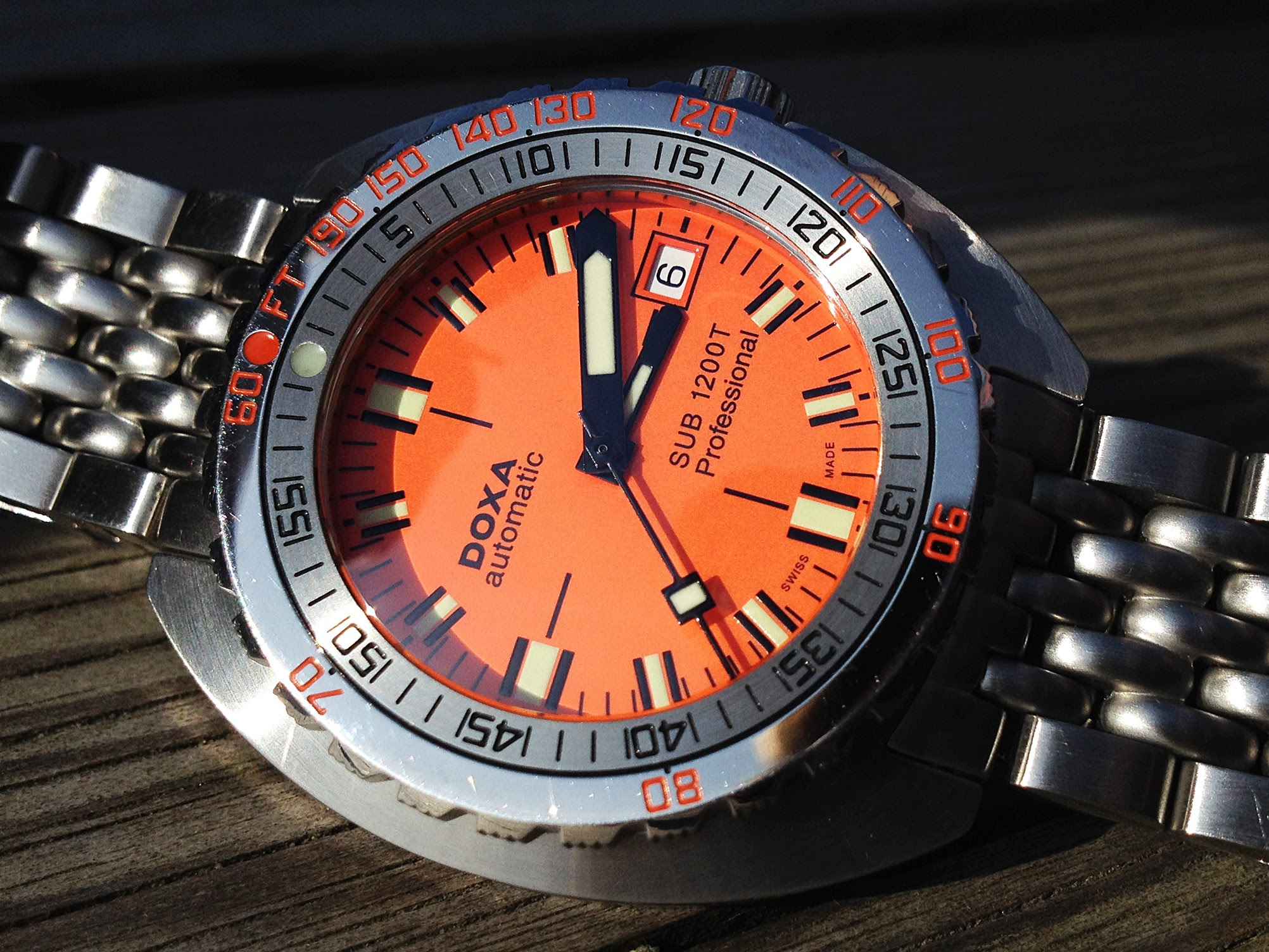 I bought my second one just because I’d gotten an idea about how good a Doxa would look on their hershey rubber. This was back in September 2014. I found a 1200T for sale in Sweden and ordered the strap from United States. Talk about a downer when it was mounted and done. It looked so good on the pictures I’d seen but on the wrist it was horrible. A totally worthless fit. At least on my wrist, which isn’t that skinny, but for this rubber to look alright you should have quite a wide wrist to get rid of the otherwise large gap that appears between the wrist and the rubber. My second 1200T was also a full set (it even had the CD) but this time it took just one month before I gave it up. The 1200T’s and I were officially done after this.

Came across these photos today of the Doxa NUMA 1200T Professional which I wore for a week in November 2012 in a so called "Passaround" where a couple of forum members chip in an equal share to finance a watch that everyone get's to try for a limited time which then is given to one of the participants in a raffle. Loved the all white hands. Cool watch.